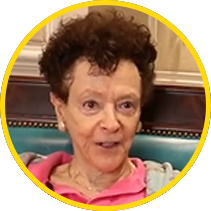 Judy Reinach is Director Emeritus and has been a member of Miami Bridge’s board since its inception over three decades ago. Judy was instrumental in the capital campaign to raise the funds to build Miami Bridge’s Miami Central location. Since 1985, she has been an active member, raising awareness for the organization through local Key Biscayne fundraising events and adrenaline-charged initiatives such as running the New York Marathon in 1997 to help raise money for another transport van—as well as skydiving twice! Her most recent dive at the age of 73 helped raise $21,000 for Miami Bridge’s transportation.
‍

Judy is not only the founding director, as well as a long-time volunteer and supporter—she is the matriarch of Miami Bridge and an exceptional mentor. One of the children she mentored, Chyna Williams, is now a grown woman and herself a mother of three. The two developed such a close bond when Chyna was struggling with various traumas, they now refer to each other as “mother” and “daughter.”

Back to Staff & Board